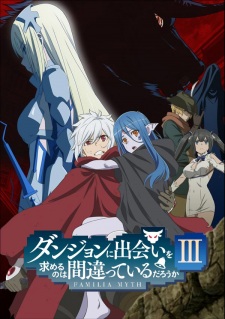 From my previous review, I mentioned that Season II was meant to be an information-revealing season, so that big “stuff” can happen in Season III.

And guess what, I’m mostly on the mark! Season III presents us with the series’ greatest conflict yet; so controversial that even members of the Hestia familia had differing opinions on the matter.

So controversial, that even the gods themselves bicker bitterly with one another to no resolution - this is the season that changes the plot of the series forever.

I’m very happy with the story; although predictable, the authors took the right step forward by introducing a difficult situation for the main characters to handle. This creates opportunities for character development and world development, alongside keeping us, the audience, on our toes as we anticipate what may happen next.

Furthermore, story elements are placed early enough in the season to count certain major events as “consistent” with the lore; for an example of a “major event” it would be something like reviving a person. In other words, for me to exclaim: “yup, that seems legit” to something like reviving a person, the story has to have some plot device early enough in the season to serve as a logical fact.

Not much of that here, except for the new main character introduced in this season. Arguably, in this context, this might be a good thing; because character consistency to resolve issues the way the viewer’s expect is what we need to see during a turbulent world event. In some anime, where both the character and world grows together, a character’s actions become difficult to understand as the audience simultaneously tries to grasp what is going on with the world.

Season III was an interesting season, and laid some story elements that can be used in the climax of the later seasons. I hope to see great things from Dungeon ni Deai wo Motomeru no wa Machigatteiru Darou Ka IV!